I was going to write about something else, but then just realized I never posted anything else about our HUGE kitchen remodel from this summer. Considering it took up almost three months of our lives, it deserves to be shown off. And yes, it IS our dream kitchen. It is open concept. It is more functional. It is gorgeous and cozy at the same time. So, here we go!

The kitchen was the biggest frustration for us. It was really outdated and then I went and put a paint color on it that made it even darker (cool, huh?). But overall, it was just so separate from all other things happening in the house. I’m not a gourmet chef so I don’t spend ALL my time in the kitchen, but it was the hub for a lot of our activities…it needed to feel more central to everything else.

Our old kitchen had a very classic footprint of the time. But it was dark and very separated from the living room (the other side of the wall).

Alternative view of the old kitchen. The laminate floors aren’t too old, but the cupboards have clearly been in this house since it was built in the late 70s.

This configuration bothered me from the moment we bought the house. It’s a very long space and we had a lot of frustrations figuring out where to put the couches and the tv. We settled on this arrangement, but the longer couch butted up against the kitchen wall so you’d still have to walk all the way around the couches to go sit down. It worked fine for two years, but I was looking forward to something that had a better flow and wasn’t so disconnected from the kitchen. 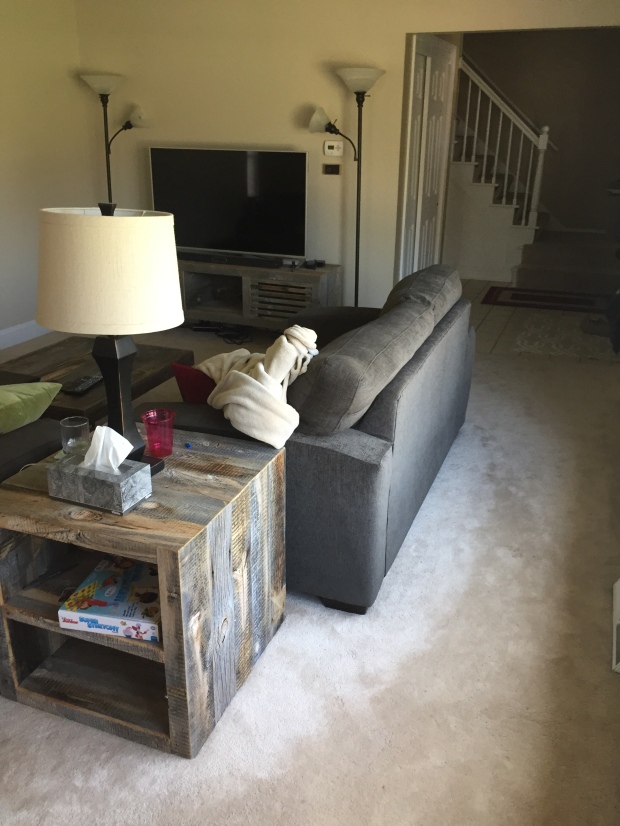 RIP Dining Room. You were good for…mostly nothing. Seriously, we only used that space and that table for putting puzzles together. If it’s wasted space, get rid of it!

3D renderings of our new kitchen

We settled on SJ Janis for all our remodeling needs. They are AMAZING. We worked with so many talented people to settle on the final vision of our kitchen. And then the process of constructing the vision was seriously one of the best experiences we’ve had with contractors ever. I completely recommend them!

This is the view from the living room with BOTH walls down. Can you imagine? At the time, it was all just a dream to us.

A different view from the kitchen table. No more dining room – just a wide open kitchen that interacts well with the living room.

First days with the walls down

Some fun facts about those first couple days/weeks. 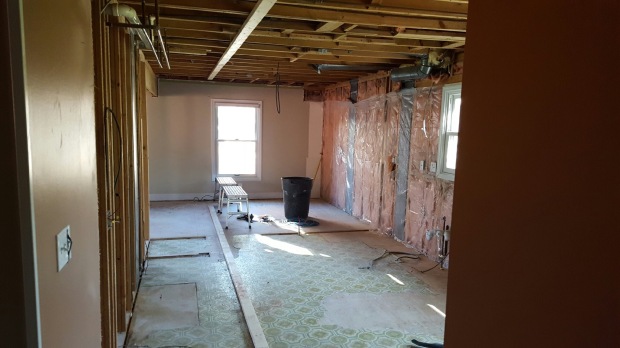 The first pic we got of the demolition from Demo Days 1 and 2 when we were down in Disney. Look at that floor!

Oh my gosh. Almost no walls! Because they took down a load bearing wall, they had to put up some support systems before they had the support beams in place.

The 70s are calling. Fun fact, that’s still underneath our current floors. It was so glued on, they couldn’t even get it up. So it’s still there. Giving us good vibes.

Fast forward past the mechanics (cupboards are in)

On HGTV they probably skip past the mechanics to get to what you’re seeing below. Like it’s just demolition and then voila…new floors and cupboards! But in actuallity, here’s what actually happened. 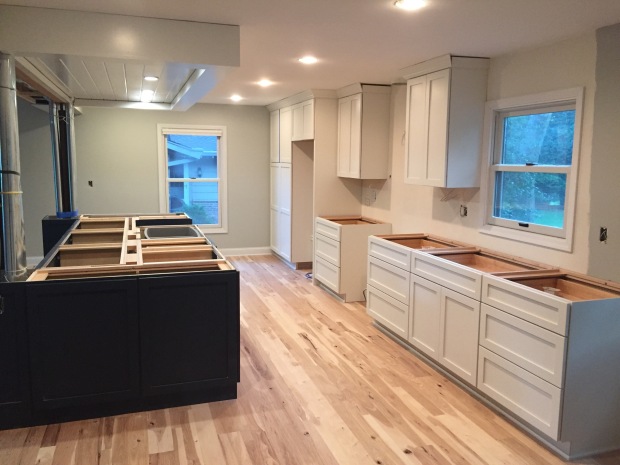 Blue island and white shaker cabinets are a go! 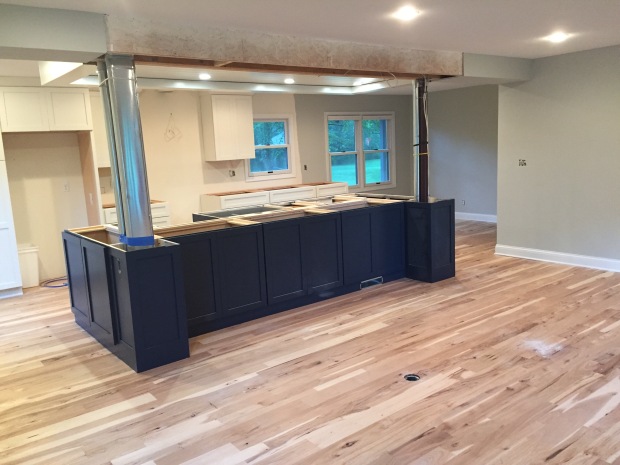 Our challenge wasn’t JUST taking down a load bearing wall. It had a lot of mechanics in it also. The system that we came up with was re-routing everything (plumbing/electric/hvac) above the island and down through the pillars that would support the island. This is where function meets design and it was amazing to see the guys work through these complex situations day in and day out.

After the cupboards when it in it was like “Okay, why does the rest take 8 weeks? What is left?” Oh, so much stuff left. Again, all that putzy work I feel like they do in 2 days on HGTV. In reality, it takes a LOT of time to do the putzy stuff. The rest of the time was spent doing the following:

Our electrician was a great sport. “Can you sit there so I can see where your head is at when someone is sitting at the island?” 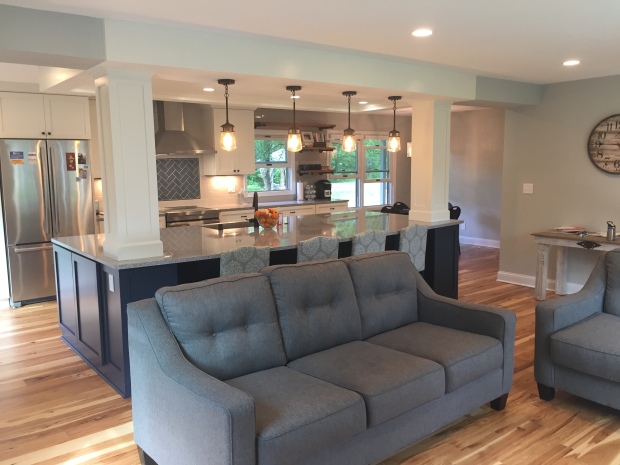 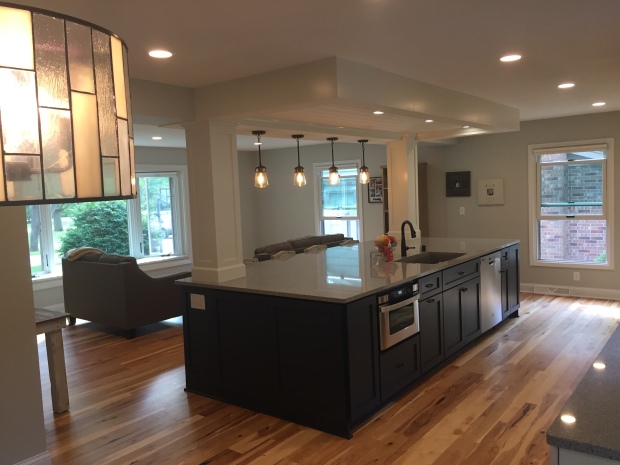 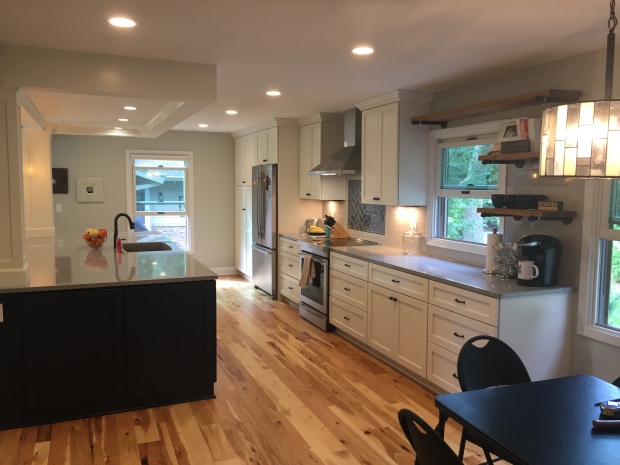 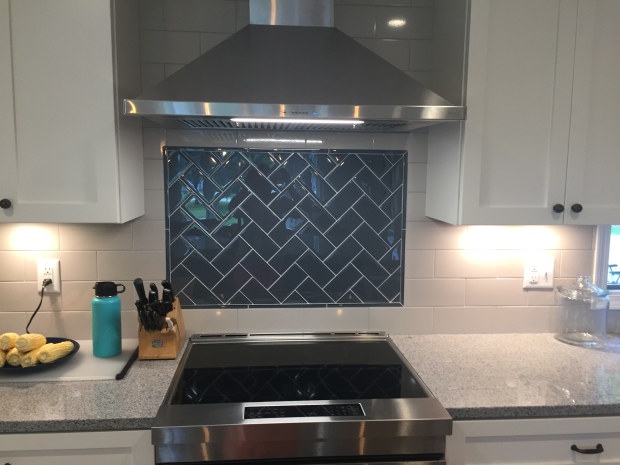 I find before and afters help because the change is so drastic it’s kind of disorienting to people who didn’t live through this every day like we did. So here you go. Before and afters. 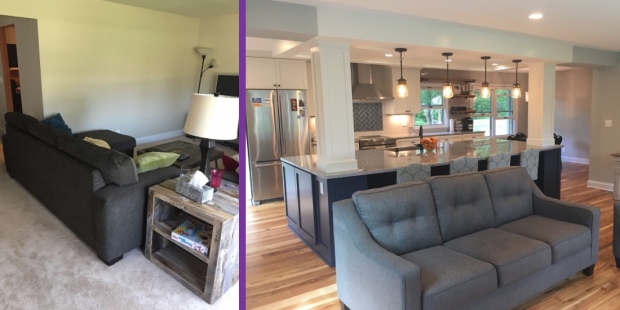 Overall, we are super happy with our kitchen remodel. This is our forever home and now it finally feels like our dream home! I didn’t mention the budget for this because that’s not very appropriate, but let’s just say we’ll be paying this off for quite a few years. However, it was either live in our old kitchen for a couple more years while we saved up, or start living in our dream home and pay for it for a couple more years.

You may or may not recall, but this was the year of Carpe Diem and getting this kitchen done so we could ACTUALLY use it and not just dream about it was a big part of how I wanted to start the year. And we did!

So here we are. Living the dream. The dream kitchen, at least.