Baby tigers – what’s not to love? This was a permanent poster in both my bedrooms throughout middle school and high school and possibly a dorm room or two.

So this female writer recently blogged about how she’s sick of having to defend “what kind of geek I am.” As someone who doesn’t geek out on much, I only know about this issue from reading about how others deal or don’t deal with this. I know there’s a lot more scrutiny around women who geek out on things and this applies to gamers, comic book fans, sci-fi fanatics, the big star wars vs. star trek debate, and countless other fandoms that I’m sure I’m glossing over.

She goes on to the describe the double standard that she’s encountered for her love of Star Wars. From her blog post (which, really, just go read it and then also follow her because it’s way more magical than this blog):

Here’s the thing: Geekdom is not an easy place for a woman. We have to constantly prove ourselves. Every day that I step out in a geeky shirt, which is almost every day, someone points at my chest and says, “Do you even know who/what that is?” With the implication that I’m just doing it for attention from geek guys, I guess?

I was wearing this Leia shirt the day my MacBook died, and I went to Best Buy for a replacement, and the sales guy said, “Star Wars *and* Apple, huh?” and snorted and shook his head sadly as if to imply I was wearing a shirt and throwing money at a pricey, geekpopular laptop just to show off for him, and he wasn’t falling for it. And I wanted to scream, YES, YOU ASSHOLE, BECAUSE I LOVE STAR WARS AND I AM IN THE MIDDLE OF EDITING A FANTASY FOR ORBIT BOOKS. I AM REAL. I AM NOT A SEX ROBOT IN A GEEK COSTUME.

The rest of her blog goes on to list the ways she could have reacted, and how she’s been in other situations like this (on twitter, at conferences, on elevators) and that this isn’t an isolated event. Read the rest of her blog here.

So this begs the question…

Is this what aspiring writers have to look forward to?

The more I learn about this writer, the more I see the path that I’d also like to take as a writer. But then what scares me is having to be scrutinized over the things that I like, which, really, why does that matter to anyone else? And when did “liking something the mostest” become a competitive sport? I’m not good at competitive sports. In fact, I hate them. I really don’t like to compete in 99% of situations.

So then I start to think about, “If this were me, what would be my own ‘geekdom’ moment worthy of confrontation?”

My current likes include running, disney (just all of it, really), post-apocalyptic stories, red moscato, HBO shows and wearing silly shirts in a corporate setting (it’s my form of rebellion, I guess).

But what sent me into a geekdom tizzy when I was younger? Tigers. I still have a slightly geeky side of me that wants to correct others when they mistake “the white tiger” for being “the siberian tiger” (WRONG). But nowadays, my geekery for tigers is more like the slowly-burning embers of a fire, not the white hot flame it once was in my youth.

Anyway, I could go on and on…and one of these days I’ll do just that (Would you buy an ebook on tigers? I could write the sh** out of that ebook.). But I worry that somehow this love of all-things-tiger or my love of anything, at current, could be attacked because I don’t love it as much as the guy who had plastic surgery to look like a tiger.

Yeesshhh. That is the line. He officially crossed the line.

Which brings us to now(ish)

I don’t want to be deterred by this. I want to keep holding onto the things that I love and just be okay with knowing that at some point, someone will question whether or not I have the truest love for that thing. I don’t know why anyone would question the things I like, but then again, everyone says whatever they want to, nowadays, so it seems like it’s going to happen at some point.

But today, I’m going to wear my tiger sweatshirt proudly.

Okay not TODAY today. I mean, I had a really important meeting today, so that wasn’t on the agenda even though it was casual Friday.

What I mean is, I’m going to wear it proudly outside my 9 to 5 and during appropriate times at my 9 to 5 (Fridays when I don’t have super important meetings).

Below is the sweatshirt that I speak of. No, that’s not me. That was the model wearing it in the Express ad. I chopped off her head so you wouldn’t get distracted by her beauty. Maybe someday I’ll take a selfie while wearing this. Or maybe in true tiger fashion I’ll just never be caught on camera…like a GOOD tiger trying to protect her young from poachers. 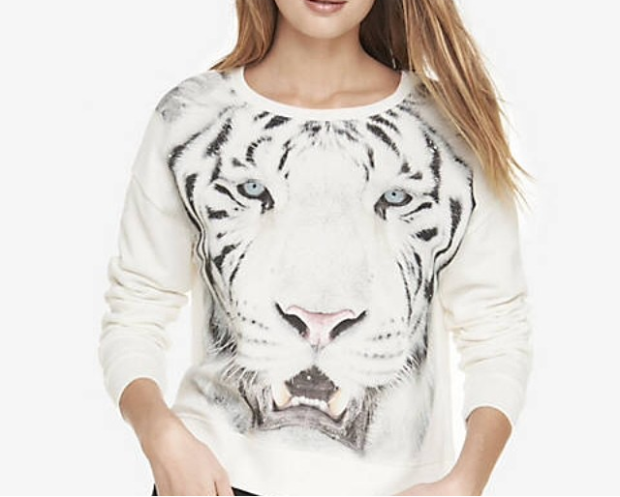 I think it makes me look huggable.

But yes, I have worn it at least five times…in public (twice at my job). I made my mom buy it for me for Christmas, this past year, because I felt it was only appropriate that I receive that gift from the woman that also created the “TIGER ROBE” (said in a booming voice with a growl at the end). Behold… 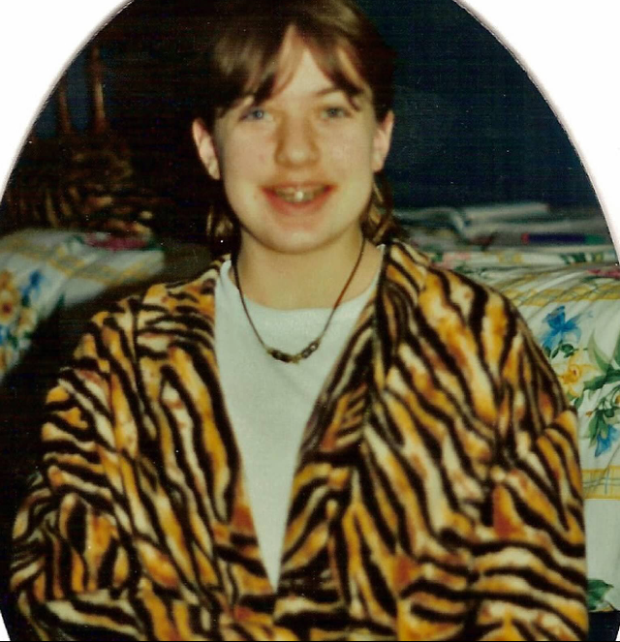 Haters to the left.

This glorious vision is me as a freshman in high school, deep in the depths of puberty, suffering through braces, trying out bangs that were awful, and not knowing what a unibrow was.

Oh and look, there’s a tiger pillow case in the background!

But this was also me when I was REALLY into tigers. I can’t hate on that. It’s still a part of me. So at least I’ve got that defense going for me.

Defending my (your) geekdom

If someone ever threatens my love for tigers I can respond with “My mom made me a tiger robe, you piece of sh**! You’re goddamn right I like tigers!”

And then I would whip out this picture, but it would be laminated and warm from being in my back pocket and they would recoil in horror (or disgust) and that would probably be the end of that conversation. I imagine.

So all of this is to say, whether or not it’s safe to geek out on tigers, or water bottles shaped like Elvis, or any other interest you may have, just go for it. You’ve only got one life. Just push those haters to the side and keep doing you. And if you’re a female? Then you have my permission to make the questioner feel very uncomfortable in whatever way possible. Creepy self portraits are my thing, but you’re welcome to also try that for yourself.

5 thoughts on “Is it safe to geek out about tigers?”