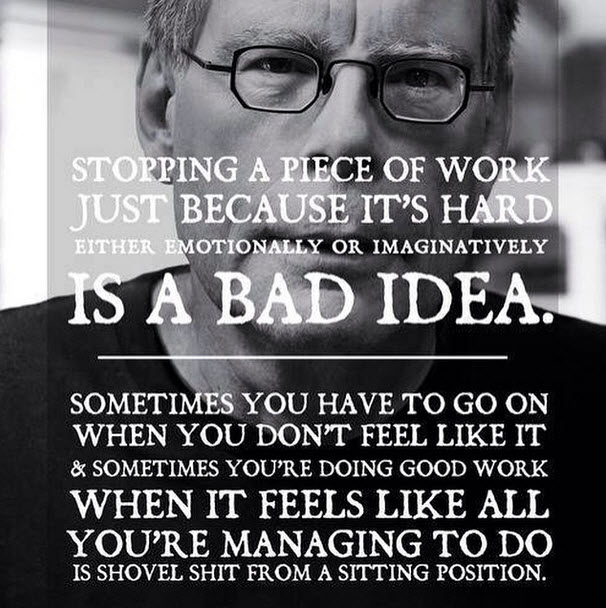 Writing a book scares the shit out of me.

But I don’t think I’m alone, here. It’s a pretty scary thing to do, right? If you’ve never tried and you’re wondering, “What’s so scary about it?” Um, well, just about everything. Here’s a list of scary things I constantly have to overcome in order to put pen to paper.

1. Everything I ever write is SO incredibly stupid.

You see that 2 year old? They’re writing more coherent sentences. And it will probably end up to be a beautifully, poetic sonnet. Me on  the other hand? I think I’ve written the word “like” about fifty times in the last two paragraphs. I SUCK AT LIFE.

2. Am I spending too much time thinking about which celebrity would play him/her in a movie?

I went through a character development exercise at various points when I was writing the first draft. And I think I spent 75% of that time googling images of celebrities that I thought would play each of the characters.  It’s a sad shame that Jamie Dornan has already been taken for a different set of books. #scewyoujohnoliverheismychristian

What right do I have to write a book? Who would want to read it anyway? Who am I kidding? It’s going to be awful when all you hear are people laughing at you (even through the interwebs). SERIOUSLY keep your day job. Keep this as on the “down low” as possible. Don’t embarrass yourself.

Are these things my story should have? How do I get them? Can I just say “conflict” a bunch? Is there enough arch in my story? Does my narrative make sense? What if my theme is just “something crazy happened?”

5. Stop trying to figure out time travel. YOU ARE NOT THIS SMART.

Okay, admittedly, it’s hard to write about time travel. Maybe I shouldn’t start there. But it just keeps sneaking in. Can I just not explain it like they do in Looper? Also, can I stop having only movies to reference? (Which brings me to my next point)

6. Um. Hi. My name is Jamie and I have a serious reading deficit.

(In unison) Hi Jamie, welcome to “Writers who need to read more.” But seriously, how much is one person supposed to be reading? Am I reading the right types of books to make me a good writer? Is it quality or quantity that I should focus on? Is it okay to read one book…every other month or so? Stephen King doesn’t think so. Dang it!

Ugh. This one is the worst. It’s like #1 and #3 but a lot more direct. Simply put, I don’t have that “certain something.” I don’t even have the fancy spelling for the french version of that phrase which I’m sure I would butcher.

…so for starters, that’s what I face when I’m staring at my story on the screen, wondering what to start click-clacking on the keyboard. And now I’m editing the first draft, which is even scarier, because I think I might have to edit so much out that I need a whole new first draft. And then I’m afraid I’ll get stuck in this never-ending loop of first drafts.

I’d like to end this by saying, “But I’m doing it! I’m killing these demons one day at a time!” It’s not true. Not yet, at least. I’m just at the stage of trying to get back into this after an almost three month hiatus (holy shit, where did the time go!?!?!). At this point,  I’d settle for just shooing the demons away for a bit, so that I can dust off the cobwebs of this story and try to keep it going for a bit longer.

Just go be kind to people for a bit. That’s all I ask.

Sarah and I did a thing today. We hiked Holy Hill! First timer over here! It was a great hike. Perfect weather, no bugs, good cardio, lots of laughs. Glad we got to start this beautiful Memorial Day weekend off right!