Katie, Jamie, Marie and Andy. The Nelson clan at their finest.

It’s that time of year again. #TBT photos of you in your Halloween costume for the next couple weeks. And as I love to say, “If you can’t beat em, join em…but still mock them openly.” I kid!!

So today’s #blogtober14 prompt is “What was your best/worst Halloween memory?” Well, I don’t know if I have a best or a worst memory, but I have some fond memories. I also recall how my tastes in costumes changed drastically.

As a kid, I was either dressed in hand-me-downs (see exhibit A) or trying to be a lumberjack. Yes that happened, stubbly beard and all. 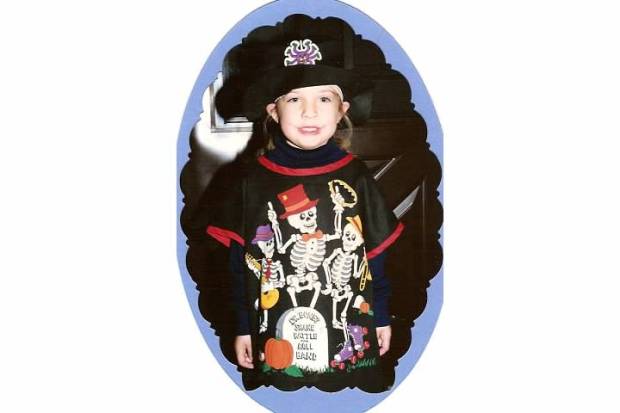 Exhibit A: Some sort of hand-me-down shared by my sisters at one point.

In college, My favorite costume was an angel. Okay, maybe it was comparable to a low-class version of a Victoria Secret angel. Post-college, it was less about the lack of clothing and more about the comfort level (see exhibit B)…okay, sometimes I reverted back to my former college days (see exhibit C).

Exhibit B: My first Halloween in Milwaukee…a mummy (me), St. Paulie girl (Lindsay), and Tinkerbell (Andrea).

Now a days, I focus on the little munchkin. His first costume was a monkey (see exhibit D) and then last year he was a seriously adorable Pooh Bear (see exhibit E). This year? Well, stay tuned. 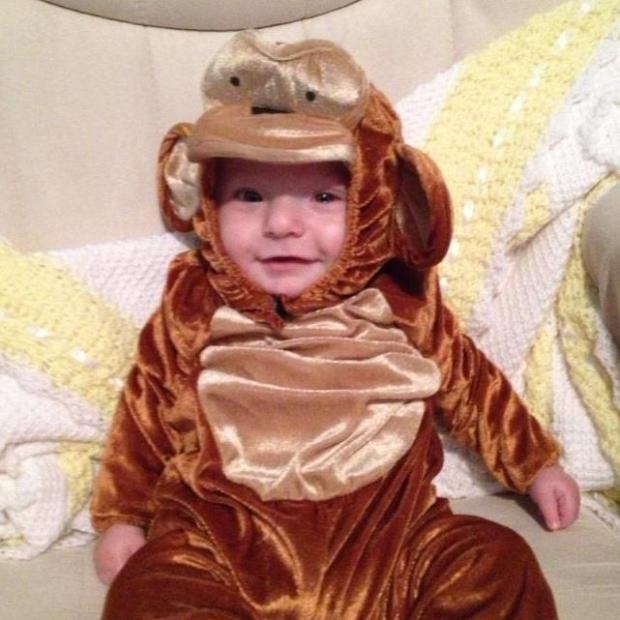 And for kicks, let’s get a shot of Jake in one of his classic Halloween outfits (see exhibit F)…

Growing up, I lived out in the country so it was very typical to be driven to and from each house. Because if we actually walked, we could probably make it to three houses in one hour, and that doesn’t amount to a lot of candy. So while we were being driven all over the countryside, it was only natural to stop at both grandparents’ houses. The first stop was Grandma Nelson’s house. She made these delicious popcorn balls covered in a colorful candy coating for each of grand kids…and most of the kids in her neighborhood. We also got a whole bag of treats just from her. To this day she still makes popcorn balls. And they are still amazing.

The next stop was Grandpa Hoaglan’s house. October 31st was his birthday so it was always a fun day for him. At his house, we wished him a happy birthday, walked them through all of the candy we’d received so far, and then we’d each pick out a KING SIZE candy bar. And that was such a big deal back then. Do you remember that? Those were rare. Apparently we weren’t yet on the path to obesity that we’re on now. But I digress.

The tune that haunted my mother for a month

Every Halloween our mom would put out all of her fall and Halloween-related decorations. The one thing I always looked forward to was this wall hanging of a haunted house that was positioned just at my height, was painted by my grandma (I think that’s true, but someone can fact check me on that) and had an actual doorbell on the door that you could push and it would sing out this tune that I couldn’t get enough of. My mother, on the other hand, was probably sick to death of that thing. But god bless her, she put it out every year, AND kept it at my height AND had the patience to listen to me ring that damn thing eight million times a day. Seriously, I was obsessed.

I can still hear the tune in my head. And just to get it stuck in your head, I found a version on youtube. I didn’t realize this until last year, but it was the theme song for “Alfred Hitchcock Presents” shows. Who knew? Well, now you do.

I don’t want to brag, but I was SUPER cool in high school. I attended these parties that were OFF. THE. HOOK. They were exclusive. Seriously, there were dues you had to pay (each year, actually). And I was the envy of all the 10-year-old girls. Yeah, that’s right. I was ruling that 4-H club in high school.

Okay, all kidding aside, I really did love 4-H.  I wouldn’t say I was ruling it, but I was the treasurer! And that was pretty cool (disclaimer: my definition of cool may vary from others). Anywho, those stories are for another day, but I stumbled upon this picture of me in 9th or 10th grade just chilling with my fellow genie cousin, Jenny. The moral of this story is don’t trust your cousin NOT to embarrass you, if given the chance. But who are we kidding, she’s obviously adorable in this picture and I’m the one who could take a lesson in finding a costume more appropriate for my age. 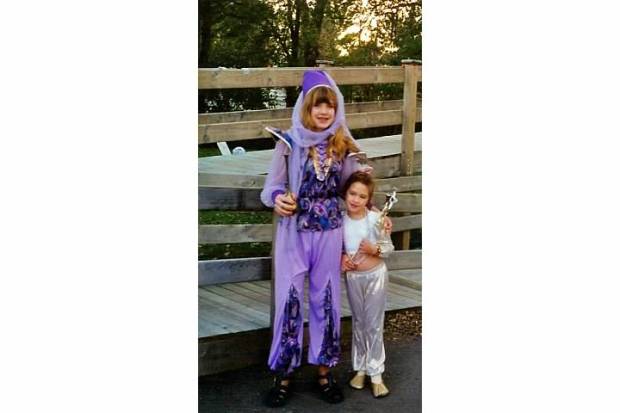 …and what’s up with those crazy shoes? Ugh. Jamie.

Thanks for taking a trip down memory lane. What was your favorite memory of Halloween? Tune in tomorrow for Lindsay’s latest post.